AVALON INSTRUMENTS collaborates with INAF (National Institute for Astrophisics), in the European Space Weather project (Horizon 2020). The project target is the design and production of a Solar Magnetic Field Monitoring System to prevent the risk of a solar flare that can damage/destroy human technology such as Satellites, GPS systems, Nuclear and Thermal power plants.

SAMM (Solar Activity MOF Monitor) is a remotely operated binocular telescope equipped with two instruments based on the narrow band Magnetic Optical Filters (MOF), with the aim to get images from different layers of the atmoshere of the sun at a high temporal cadence (40 sec) and a resolution of 1000Km on the sun.

SAMM can simultaneously produce images giving a “real time” map of magnetic fields and plasma evolution in the active regions of the sun that can determine powerful “solar storms” causing severe damages on many infrastructures on Earth. A network of SAMM telescopes can provide a very unique instrument to forecast these disrupting events in a risk mitigation framework.

According to the World Meteorological Organization, “Space weather encompasses the conditions and processes occurring in space, including the sun, in the magnetosphere, ionosphere and thermosphere, which have the potential to affect the near-Earth environment”.

The Sun is the main driver of the space weather that causes substantial socio-economic damage at Earth with “Solar storms” wich are events deriving from explosions on its surface, caused by instabilities of magnetic fields in the atmosphere. A ‘solar storm’ actually encompasses three different components: solar flares, solar energetic particles (notably protons) and coronal mass ejections (CMEs). A large solar storm would produce all three.

Tab. 1 - The three components of a solar storm

These physical phenomena may have an impact on human activities and technology on Hearth. As our society becomes ever more dependent on technological infrastructure, the impact of severe space weather events becomes increasingly dramatic. This includes both direct effects on specific industry sectors, such as electric power production, spacecraft and aviation industries, and indirect effects on dependent infrastructures and services, such as positioning and navigation systems, electrical power grids, oil and gas pipelines. 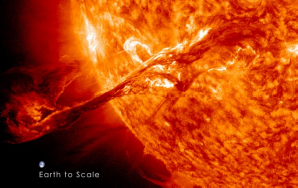 A long filament of solar material from the Sun's atmosphere (August 31, 2012)

For example, during a CME, the sun releases a burst (or bursts) of plasma carrying intense magnetic fields. This material compresses the Earth’s magnetic field lines (Fig. 1), causing their reconnection on the night side of Earth and allowing plasma to flow into the magnetosphere. A consequent increase of electric current in the magnetosphere and ionosphere generates electromagnetic fields in the upper atmosphere that in turn induce ground electromagnetic fields.
Ground electric field variations can induce large electric currents in power transmission lines, pipelines, and telecommunication cables. Large amounts of geomagnetically induced currents (GIC) flowing through the power grid can damage power transformers and/or lead to voltage collapse. 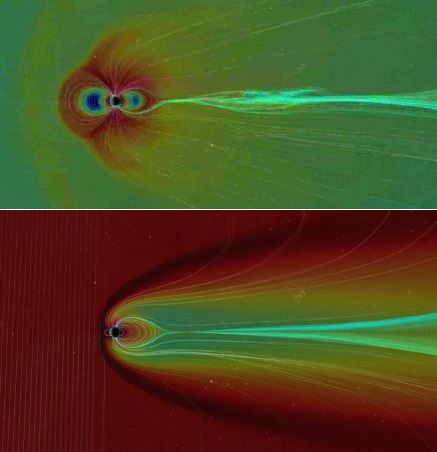 Simulation of the magnetosphere and it’s compression during a Carrington-like Event.

Failure of these critical assets could cause system wide instability issues leading to cascading failure across the electricity system, passed on to other critical interdependent infrastructures such as transportation, digital communications and our vital public health systems. This disruption could also cause considerable disruption to business activities in general.

The biggest storm ever recorded happened in 1859 (Carrington event). At that time telegraph systems all over Europe and North America failed, in some cases giving telegraph operators electric shocks. Less severe storms have occurred in 1921 and 1960, when widespread radio disruption was reported.

The March 1989 geomagnetic storm knocked out power across large sections of Quebec. The variations in the earth's magnetic field tripped circuit breakers on Hydro-Québec's power grid in a few minutes. The power failure lasted nine hours.
Moreover many satellites were damaged during the 2003 “Halloween Storm" and since the late 1990s, partial or total losses of satellites have been recorded as well (Intelsat, Anik, Galaxy, Sky Terra 1, Spaceway 3, etc.).

In 2012 a superstorm missed the earth by just one week. The effects would have been devastating. If a giant solar storm like the one in 1989 hit the Earth, large parts of society could be left without power for months or years. 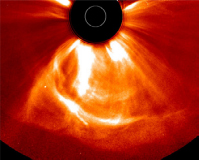 Another CME photographed by the STEREO satellite in 2012 (NASA)

More recently, multiple solar eruptions occurred between 4 and 10 September 2017, disrupted the HF radio communications used by the emergency managers during the hurricanes season in the Caribbean. A flare caused a near total blackout in HF radio link both used in disaster response and aviation tracking.
In 2013 the threat-assessment report by Lloyd’s insurance concluded that extreme space weather events would cause $2.6 trillion damage (>10 times that of the most destructive hurricanes and earthquakes), and it would take between 4 and 10 years to fully recover. More recently, examining disruption to the global supply chain, Eastwood et al. [2017] estimated a similar total economic loss up to $2.7 trillion. However, (super)storm apart, the ‘nominal’ space weather causes an economic loss of 10 billion €/year.

Observation and prediction of SW Events

Pprogrammes and infrastructure have been developed worldwide with the aim to predict the solar activity and to forecast its potential impact to Earth and its space vicinity (known as geospace). Predicting solar flare activity is particularly challenging. It is even more challenging to predict the impact of that solar activity on Earth, other planets of the solar system and natural or artificial satellites. Yet, prediction is what we need in order to mitigate these negative effects, as they cannot be proactively engineered against.

Various government agencies have equipped themselves with monitoring and control centers for solar activity (NOAA, ESA, NRC, SANSA, SWS) and even individual Nations have implemented structures capable of issuing daily Space Weather bulletins.
Today’s forecasting systems, however, are either based on semi-empirical models that are subject to serious shortcomings or have to rely on inherently incomplete solar observational data, lacking vital information for an educated assessment.

Instruments that currently are able to perform magnetograms (SDO-HMI, GONG), measure the magnetic field exclusively in the Solar Photosphere at one single quote (270-300 Km), moreover with a low cadence (12 minutes) and low resolution images. None of them is currently able to provide simultaneous information of magnetic fields, plasma velocities and solar structures intensities at different heights with high cadence and high spatial resolution. 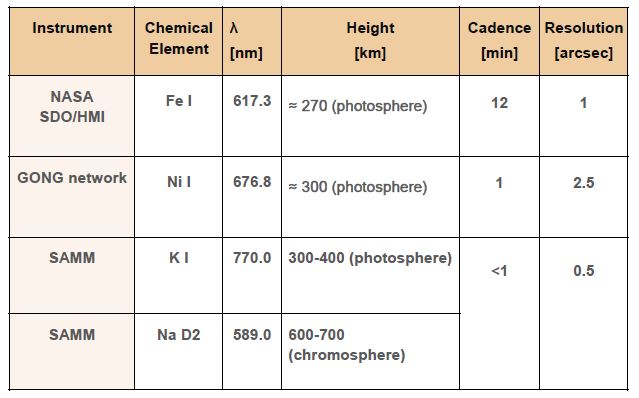 Comparison between SAMM and similar instrumentation.

To assess these shortcomings AVALON Instruments and the Italian National Institute for Astrophysics (INAF) developed the SAMM (Solar Activity MOF Monitor), a new type of instrument specifically thought for a constant monitoring of solar activity with the aim to provide a unique dataset useful for forecasting Space Weather events. Each SAMM (Fig. 2) is based on two telescopes of 23 cm in diameter, each equipped with a narrow-band polarimetric system to monitor the impulsive activity of the Sun at different heights in its atmosphere.

These polarimetric instruments are based on the Magneto-Optical Filters (MOFs) a unique technology of its kind.

The physics at the core of the MOF is the rotation of the polarization of the light passing through the gas cell. The rotation occurs at specific wavelengths, defined by the atomic species of the gas, the gas temperature and the magnetic field. When used in combination with polarizing plates, it works as a very narrow (50mÅ) band pass filter and can be used in imaging devices.

Each telescope can be installed in a remotely controlled dome designed for daytime observations. 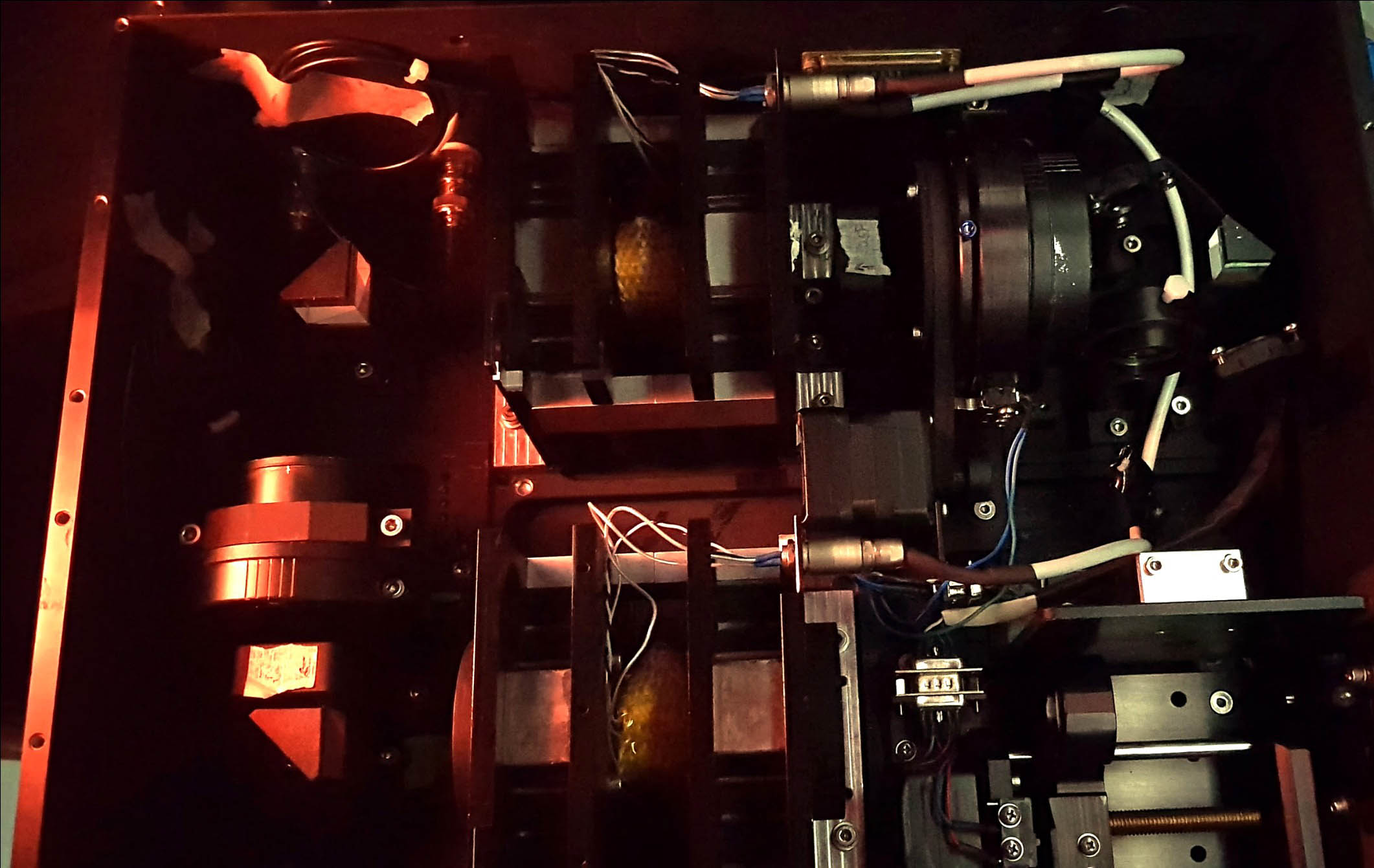 With a network of SAMM telescopes and merging together our group that is a leader in the field of instrument manufacturing with solar and space physics research teams, we'll be able to contribute to develop a new forecasting model providing a unique leap to mitigate adverse space weather phenomena. 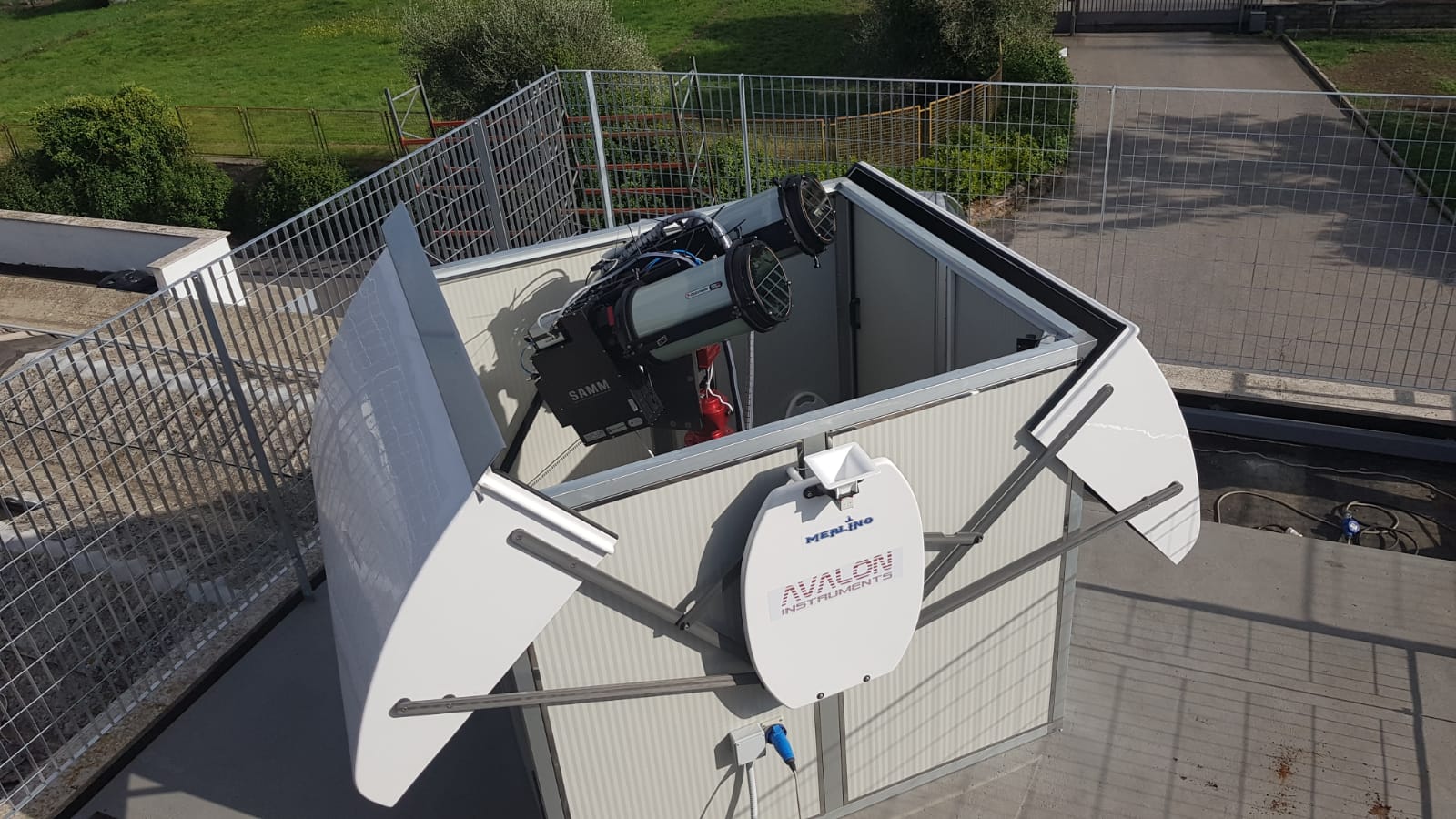 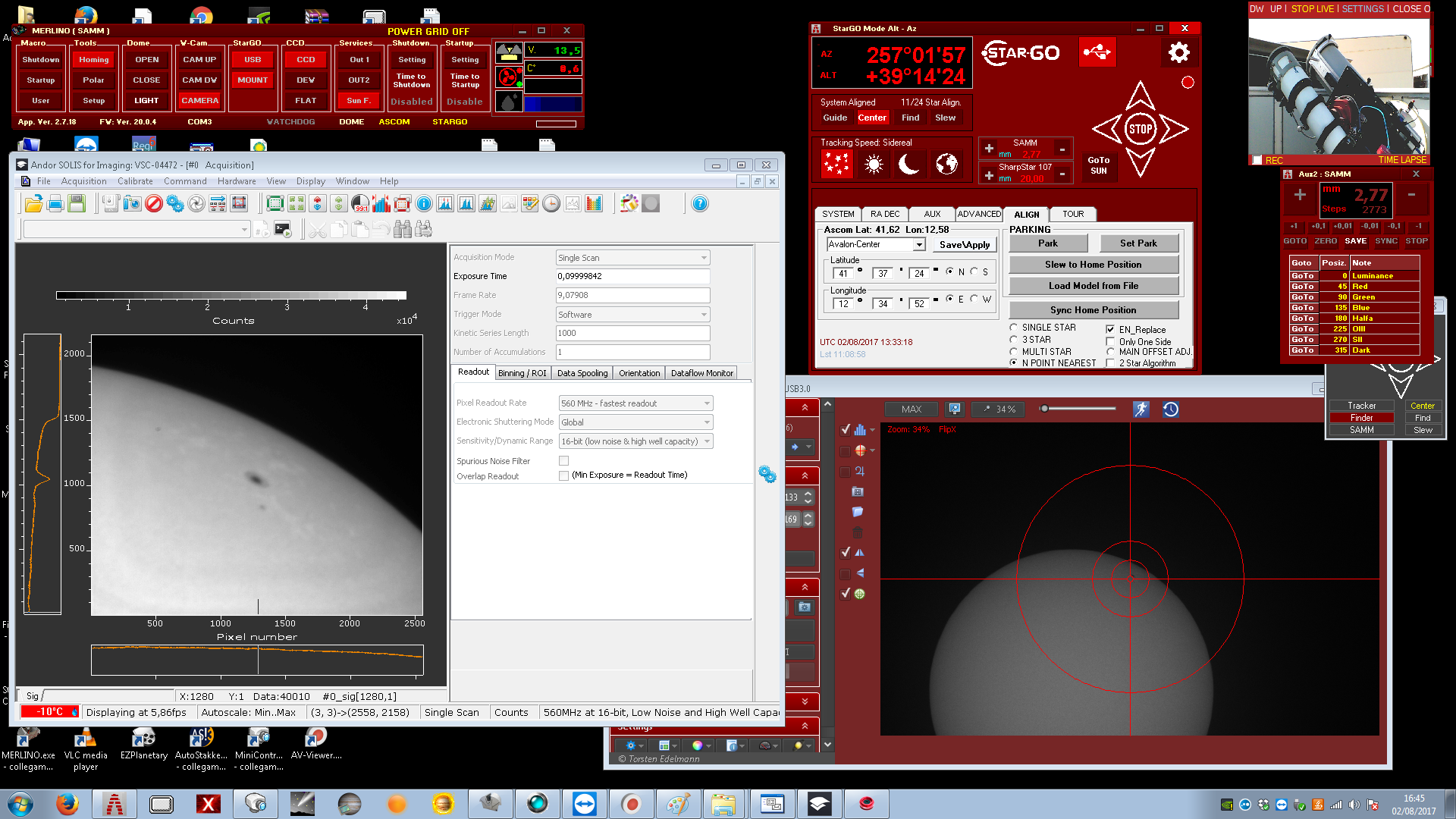 Control software of the SAMM prototype 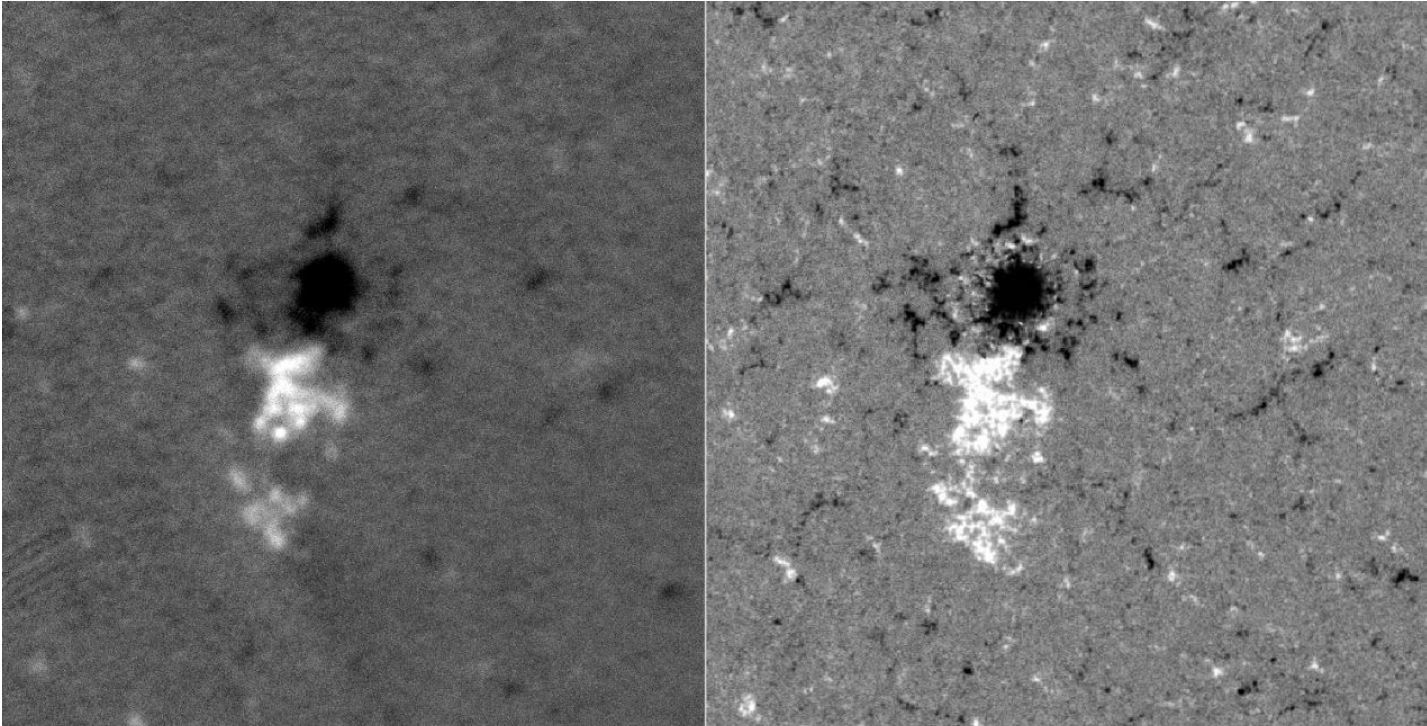 On the left magnetogram taken by the SAMM in the Potassium band with 0.4 seconds of total exposure, on the right magnetogram obtained the same day by the SDO satellite with 45 seconds exposure (Courtesy of NASA/SDO and the AIA, EVE, and HMI science teams)

This picture (fig.4 - sx) of a sunspot shows the first results from the SAMM prototype. The main difference among the two images is the spatial resolution that in the case of the SAMM image is badly affected by the suboptimal air turbulence at the testing site and will be overcome as soon as the instrument will be placed in a more astronomically suitable site. On the other side the magnetic field intensity resolution is much better in the SAMM magnetogram that is able to distinguish a modulated signal even in the regions where SDO signal is saturated (completely black or completely white without midtones). 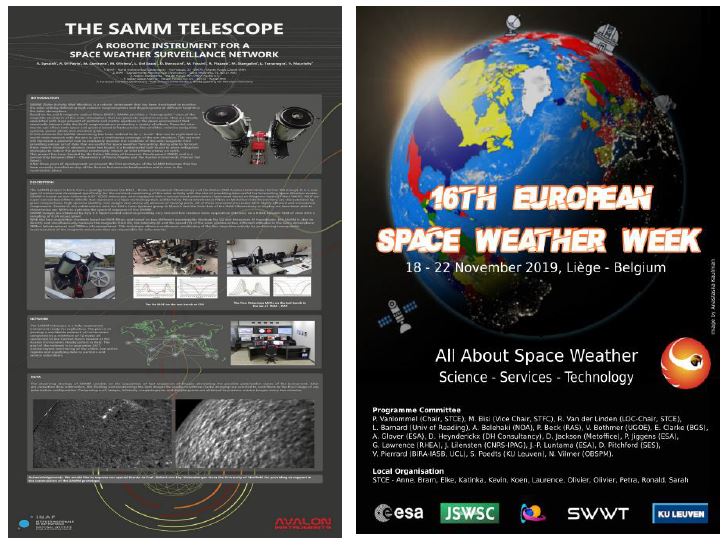