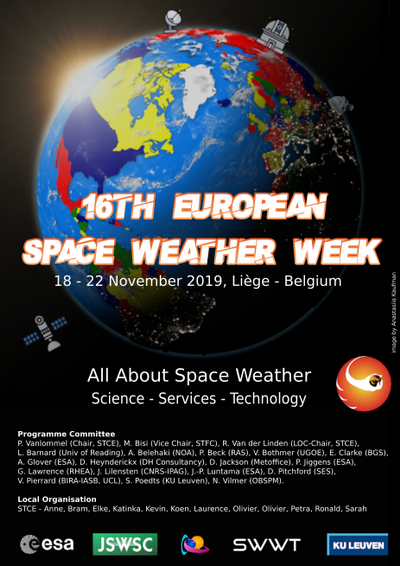 The Project has been shown during the 12 session of the Space Weather Instrumentation Conference held at Liegi (Belgium) on Thursday 21st November 2019. SAMM (Solar Activity MoF Monitor) is a robotic instrument that has been developed to monitor the solar activity delivering high cadence magnetograms and dopplergrams at different heights in the solar atmosphere.

Based on Na and K magneto optical filters (MOF), SAMM provides a “tomographics” view of the magnetic structures of the solar atmossphere that can generate explosive events usually associated with large amount of particle and matter ejections in the space environment that eventually interact with the Earth magnetosphere producing a variety of effects. Powerful solar storms can affect both space and ground based infrastructures like satellites, avionics navigations systems, power plants and electrical grids.

In this scenario the SAMM observatory has been realized to be a “node” that can be replicated in a world-wide network with the aim to give a continuous coverage of the sun situation. This network will present a powerful tool to constantly monitor the evolution of the solar magnetic field providing unique set of data that are useful for space weather forecasting. Being able to forecast these events enough in advance (even few hours) is a fundamental task to put in place mitigation strategies to reduce the potential catastrophic impact on vital infrastructures on earth.

This project has been funded by the Italian Ministry of Economic Development (MiSE) and is a partnership between INAF – Observatory of Rome/Naples and Avalon Instruments (former Dal Sasso).

After Three years of development we present the first prototype of SAMM telescope that has been recently installed on top of the Avalon Instruments headquarters and is now commission phase.